Not everyone has the luxury of a nice big garden so it’s all the more important for us to utilise the space that we have, especially in city centres where space is really at a premium. I have collected a few nice small spaces that have been designed to maximise the feel and environment that the owner has to work with. Some are more designer, some wild and some homely. 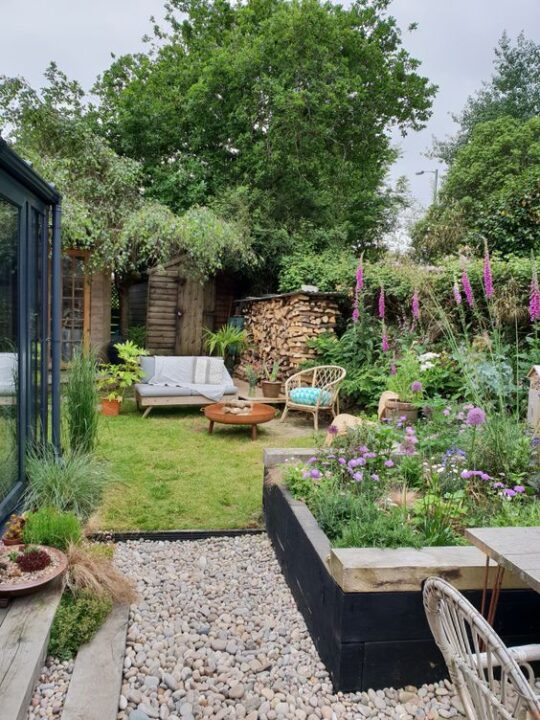 This garden is a more homely feel with rustic weathered wooden trough planters and an old shed. It works though and has a very welcoming feel in a small space. Having the purple flowers dotted around help add some colour as well. 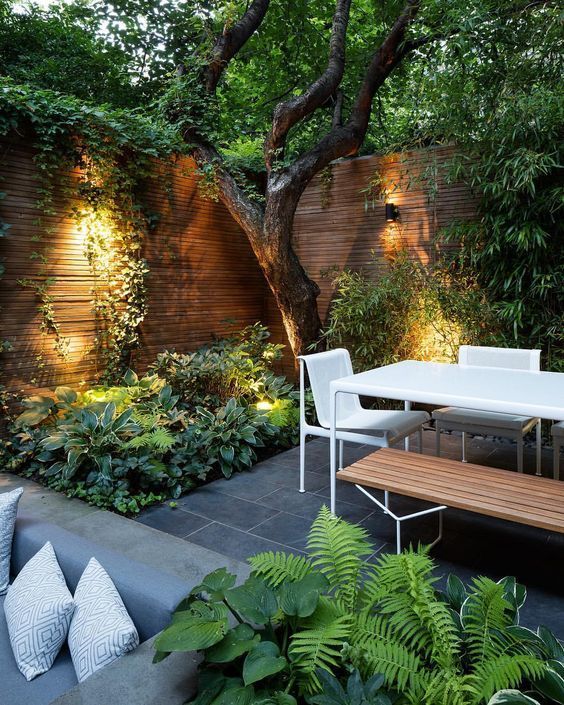 Changing the scene rather, we move to a much more designer look that utilises lighting to accentuate areas of the garden. The design is much neater and very different to before with perfectly maintained wooden fencing and plants. The absence of bright colours helps keep the colour pallet uncomplicated and neat and having the furniture in a bright white makes them the main focal point of the garden so it makes sense that they are very stylish. 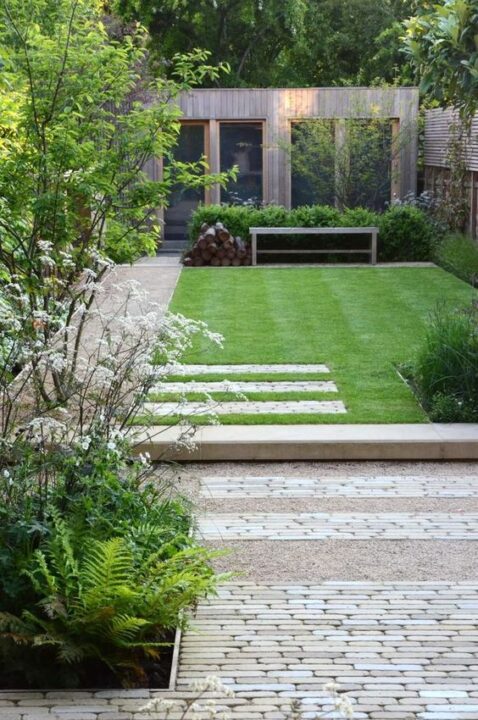 What looks like a simple garden but actually I am pretty sure if you tried it yourself it wouldn’t look half as good. The allocation of a decent chunk of grass is something the previous garden lacked the luxury of be the planting is similar as too is the stylish design. The path leads down to a contemporary shed/office which is not only practical but also adds a lot to the garden design. Notice the use of different textures, materials and layers.

Probably the most different design as well as most impractical this space has removed the majority of usability from the garden and replaced it with large foliage. There is space to enjoy the fire pit and the large foliage plays the roll of creating an atmosphere as well as being low maintenance. What puzzles me though is where that path leads, maybe I’m missing something. 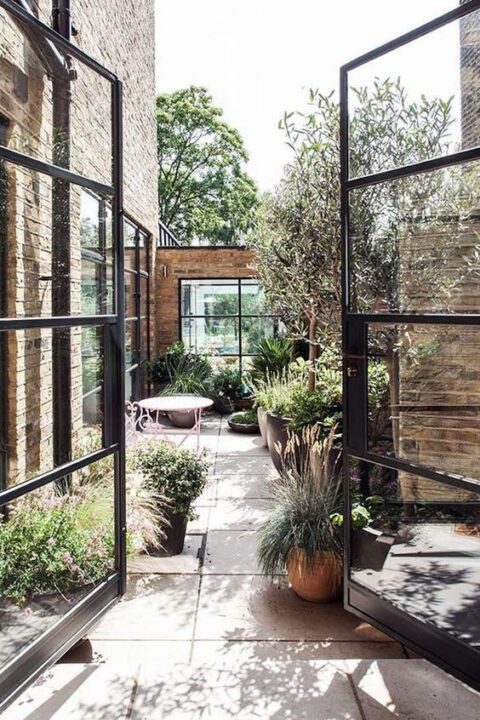 Photographed at the perfect time so the sun is casting down on this courtyard I suspect that is not always the case. The utilisation of planters both large and small to implant some foliage has worked really well and varying size and height enables the visual facade of plants to be broken up. There is little more than a small table for usable space but with the planters around it adds a really nice atmosphere 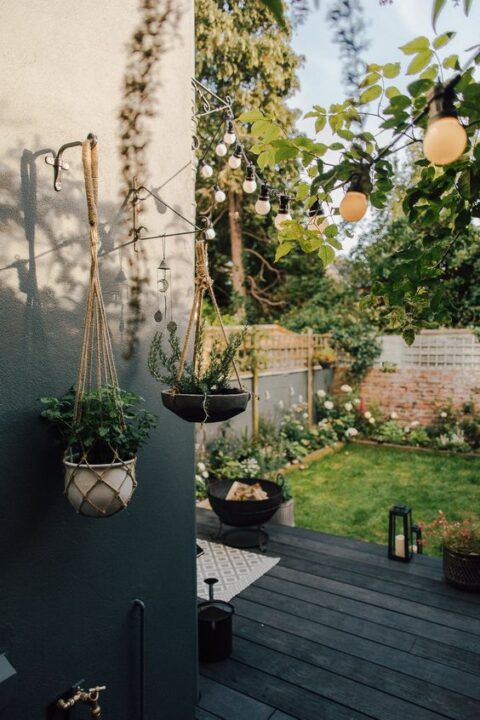 With a Scandinavian feel to this garden the black deck and paintwork adds a touch of chic. The garden itself is pretty simple with just a border that is planted up around the edge. It isn’t mad on landscaping but its the details that bring this one together. The red brick wall at the back, hanging baskets and lanterns all come together to create welcoming vibe. 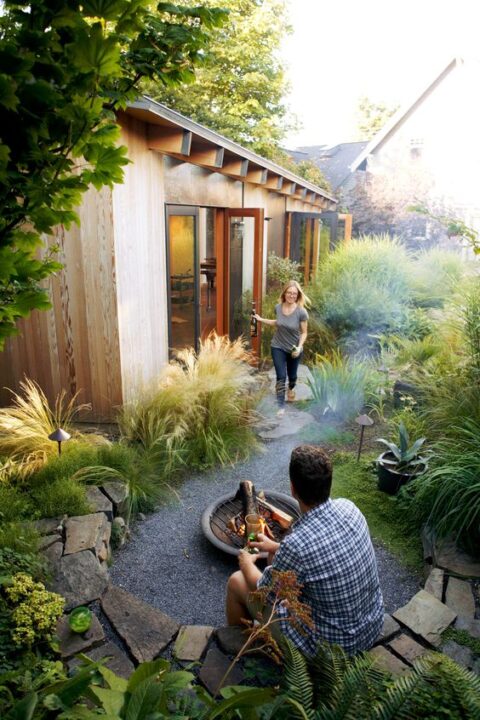 something quite different from the previous gardens this brings elements of them all. The impracticality of large swaths of the garden turned over to large foliage which in this case is more established and thus more effective. The shed/office building that adds to the feel of the garden in a contemporary way. The way the design is somewhere between designed and natural. The simple colour scheme to not over complicate the design and keep it easy maintenance and the small but useful seating area around a focal point. 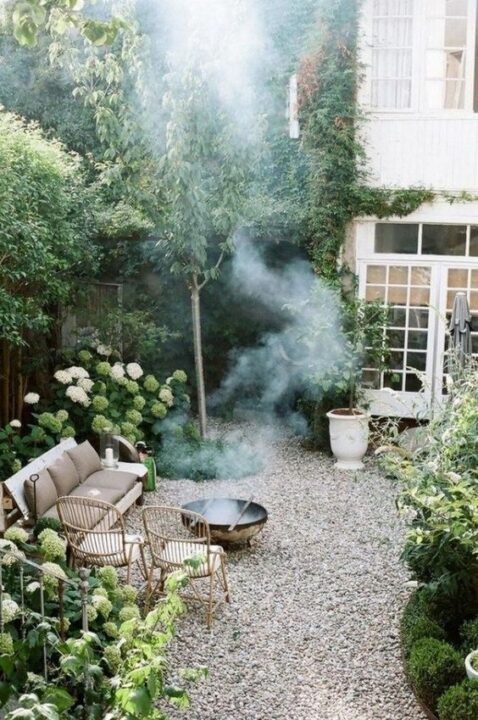 Removing the grass from the ground gives an interesting effect. It creates more of a feature of the greenery around it by creating a greater contrast between floor and plants. It also has the benefit of not needing mowing but obviously is not so child friendly as it hurts when you land on it. The colour scheme is again simple here but unlike the others some white flowers have been injected in to the scene 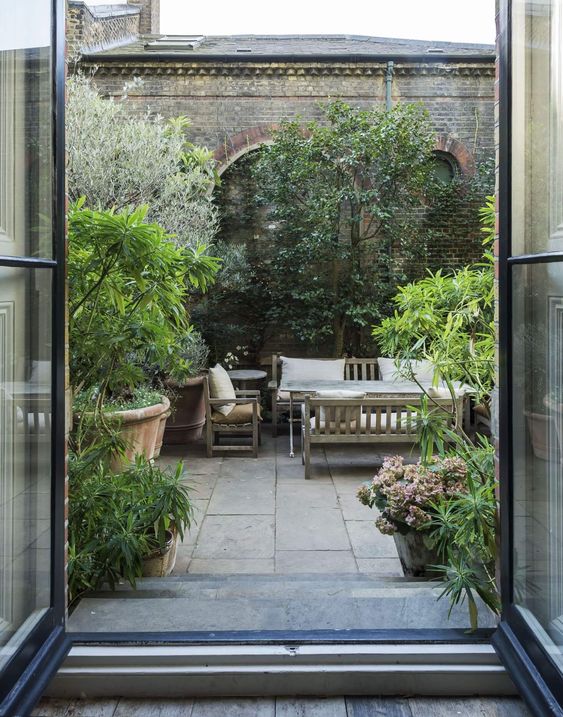 Another small space courtyard that uses planters to make the most of what it has to offer. It is a little bigger than before and hosts a worn in set of garden furniture. Both this and the previous courtyard have a more natural feel with odd sized planters used for foliage housing rather than constructed landscaping. The looks is very different to a contemporary space but both are very appealing. 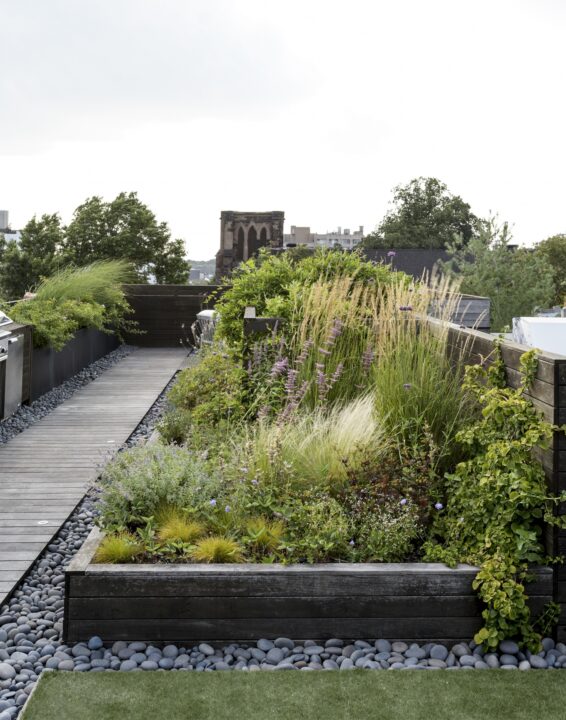 The dream space, a roof top terrace in a nice city. By definition it won’t be huge but the design brief will also need to take in to account that the views are the most important feature it has to offer. This roof terrace has a really nice combination of seating, cooking area and greenery. 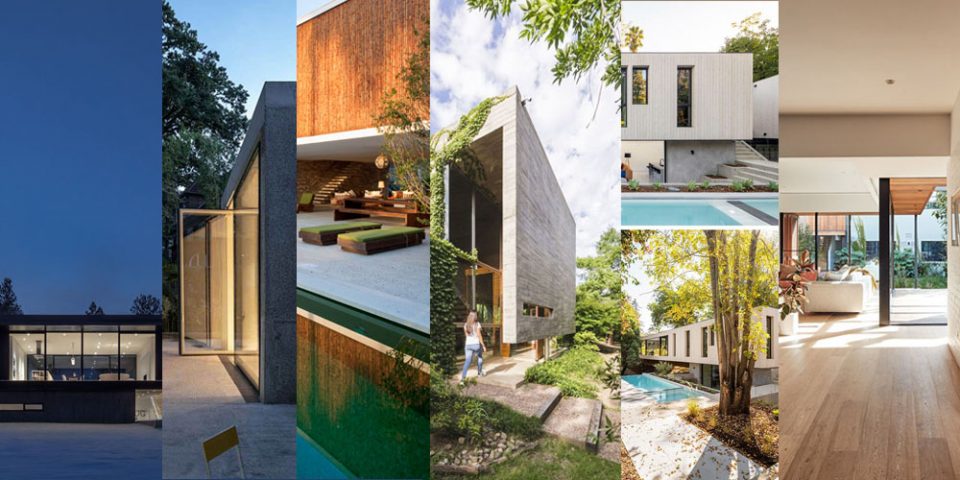 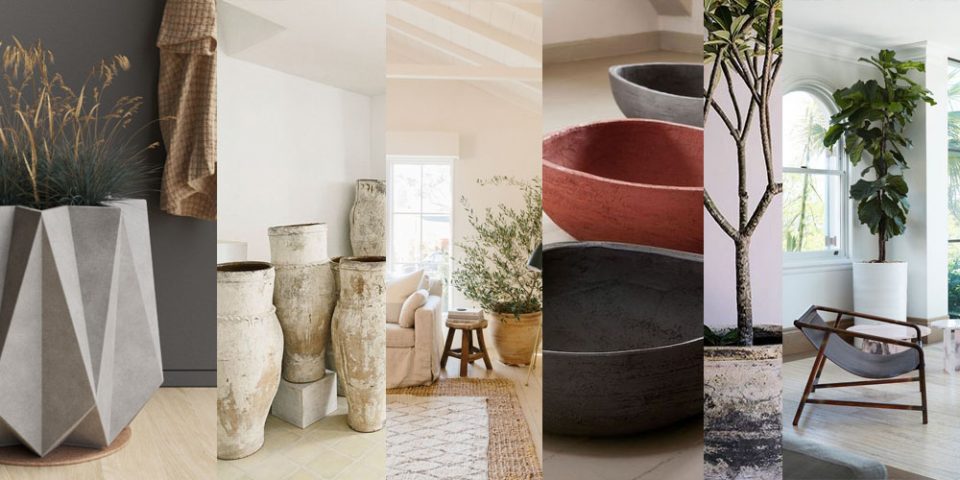 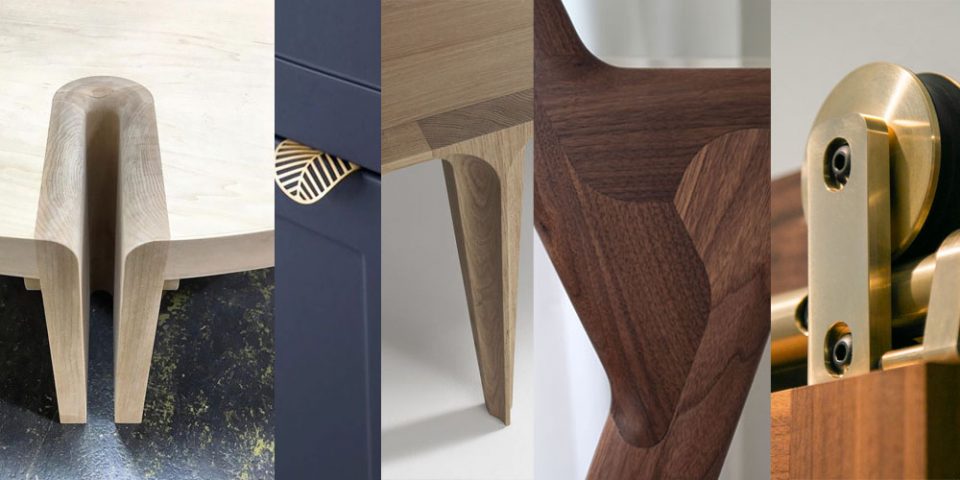 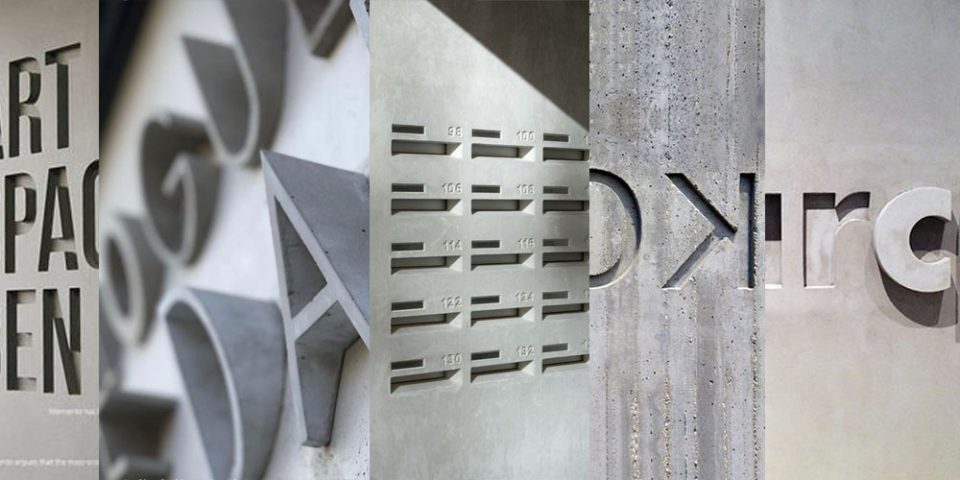